It was December 21, 2012: the date on which, according to the Mayan prophecy, a new “katun” would begin, or, as many thought, the world would end.

People were gathered on the white sand of the Mexican Caribbean, perhaps expecting destruction and annihilation. Luckily, that didn’t happen. What they did see was a statue, designed by Arturo Tavarez, that would become the icon of a new era in the life, tourism and history of Playa del Carmen.

It was the beginning of a period that will last another 5,120 years.

With it, Playa del Carmen declared itself ready for a new time, where the charm and mystery of the Mayan jungle and tradition with a modern touch came together in the “Mayan Portal” (the name of the statue), as a message of solidarity and growth between the original peoples and the rest of the world. 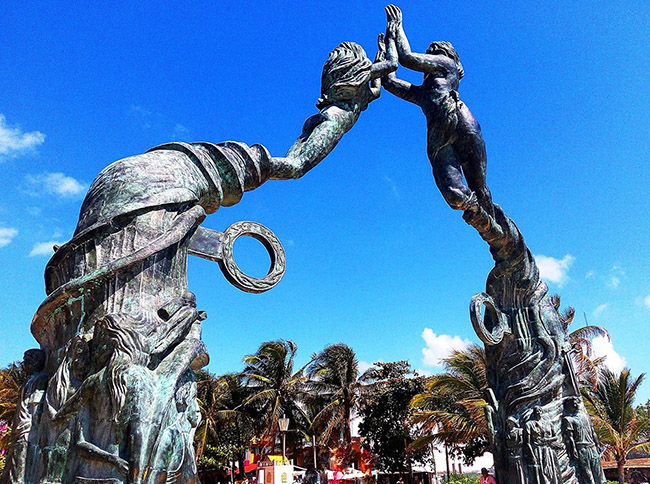 Two figures stand evoking the ball game, a ritual that became characteristic of the first inhabitants of this wonderful place.

Standing almost 30 feet tall, a man and a woman hold hands to create a new cycle of light that represents hope.

A spiral of wind and of water show that Playa del Carmen always brings out the best in everyone.

The “Mayan Portal” is not a place where the world ends; on the contrary, it’s an open door for visitors and the people whose hard work has built this tourist destination that has become a symbol of prosperity in the Mayan Peninsula. It’s a way to invite locals and visitors to become part of a history that isn’t over yet.

Would you like to see the “Mayan Portal” for yourself? If you’ve already visited, what did you think?