If you’re staying at a Happy Address accomodation on late October and early November, you definitely should attend the Xcaret’s Festival of Life and Death Traditions 2018, another wonderful Caribbean experience which happens every year. The Day of the Dead is a traditional Mexican celebration. The food, style and other cultural elements may vary according to the specific region where this ancient traditional celebration takes place. The cultural relevance of the Day of the Dead is such that it has been declared World Intangible Cultural Heritage by UNESCO.

On this year edition, the special guest will be the Mexican state of Zacatecas. So, the gastronomic display will feature gorditas, Fresnillo enchiladas, Sombrerete brujitas, “poisoned” tacos, and asado de boda, besides traditional cuisine from Yucatán and Quintana Roo. The music will include the classic Mexican Revolution “corridos” as well as traditional songs from Zacatecas. Gala concerts, guest musicians from Colombia, and a percussion ensemble will also be part of Xcaret’s Festival of Life and Death Traditions 2018.

Stage shows are in, too! There will be puppets, spoken-theater, and circus performances, as well as traditional sketches from Zacatecas, Yucatán, Quintana Roo, and Quebec. If you are fond of photography, painting, or illustration, you will also enjoy a variety of exhibitions and workshops, besides the display of the traditional altars dedicated to the dead. 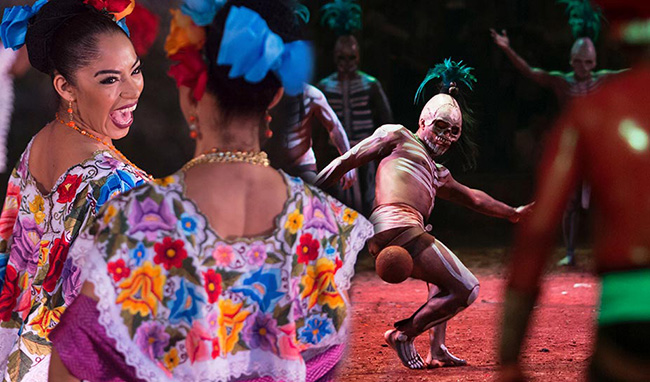 This year, Xcaret’s Festival of Life and Death Traditions will feature for the first time three gala concerts: Eugenia León will run her show on October 31th, and Ely Guerra will rock the stage on November 2nd. Both of them will perform together on November the 1st.

At Happy Address we want you to enjoy the beauty and culture of the Mexican Caribbean. We are waiting for you.